How is it the first of August already? For folks living in the northern hemisphere, most of us are experiencing the hottest outdoor temperatures of the year.

With hot temps, guess who comes to visit? Bugs! Whether or not you are a fan of insects, this is an opportunity to look closely in your gardens (or the floors of your homes?) and search for what is bugging you.

Truth be told, I rather like most insects. I find many of them beneficial to gardens and even places indoors. Spiders are not insects but rather arachnids with eight legs. Insects have six legs. If I find a hapless spider fumbling to climb out of the bathtub, I’m known to get a tissue and help it out…then throw it outside. I do the same for moths. Perhaps I sound like a misguided Mother Nature, but I’ve seen too many 80s horror films in which the bugs strike back against the mean humans by swarming and devouring or growing to giant sizes and biting off heads. Insect karma…sounds exciting, right? No?

The bugs I dislike are ants, cockroaches, ticks, and flies. Not a fan of black widow spiders either.

I do get excited when I see dragonflies. My all-time favorite is this one of a dragonfly molting out of its exoskeleton.

I’ve come to understand that the most exciting thing about life is change.

I found this one a few days ago. When it didn’t fly away from the tomato plant upon my intrusion, I nudged it and it was dead. Forever immortalized in photos.

This is a California Root Borer, a type of “longhorn beetle,” I found on my doorstep. I don’t know what it’s doing in Washington, but it’s about 2 inches long. They fly at night and only live for two short weeks.

What’s Bugging Me About Our Property

Delay after delay, that’s what.

Last week the cement floor was finished and the gravel driveway was completed. There is a delay with the shop doors. Building slow-downs have been a major problem in the construction industry, because:

We are so close to the finish line and plan to close the loan this month!

Life needs to be like a roller-coaster ride with ups and downs. Otherwise, it’s not exciting.

This is one roller coaster ride I could do without–I have enough excitement in my life.

OK, back to the bugs…

Enjoy my gallery of bees on various flowers. Without bees as pollinators, we would starve.

Be sure to checkout my Sunday Stills page for August themes. Please note, I am planning a three-week end-of-summer break between August 22-Sept 5.

Sunday Stills is a wonderful community of bloggers and photographers who desire to connect with one another. Below are last week’s links from bloggers who shared their favorite geometric photos.

Next week’s theme will be images related to your favorite song lyrics. If this is unclear, it might be best to think of your favorite song(s) and highlight some lyrics with your photos. Here is an example from Marsha and my example from 2017: My Favorite Things. Also, to avoid copyright infringements of published lyrics, only post a few lines rather than the entire song. If you write poetry or your own songs, you can certainly use your work for this theme!

Thank you for your continuing support of Sunday Stills! I appreciate your beautiful creative photography, poetry, stories, and fun conversations! Have a great week!

The weekly photo challenge offers a Surprise in the guise of an ordinary dragonfly. 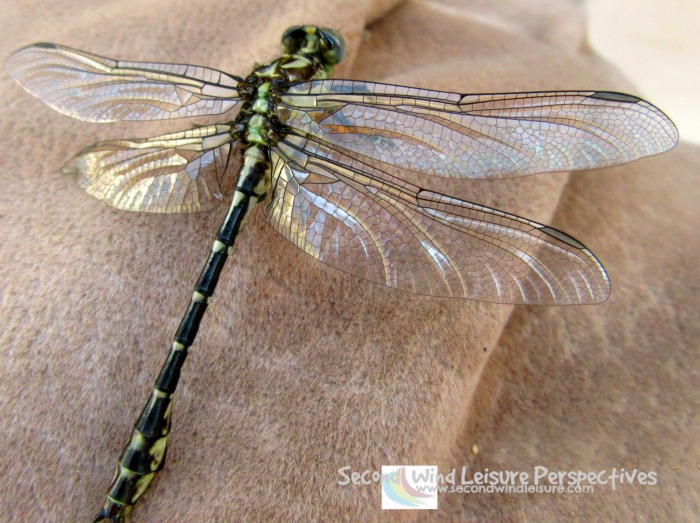 Dragonflies are beautiful creatures. This one was near the end of its life and simply rested unmoving on our outdoor chair. I used last year’s, then new, digital camera and took a series of shots.

In my next image, I photographed him from the top. You can see the gossamer wings almost like delicate stained glass, and the emergence of something else. But in the next shot…wait for it…

SURPRISE! No wonder other bugs quake in fear!

Hope you enjoyed the show! 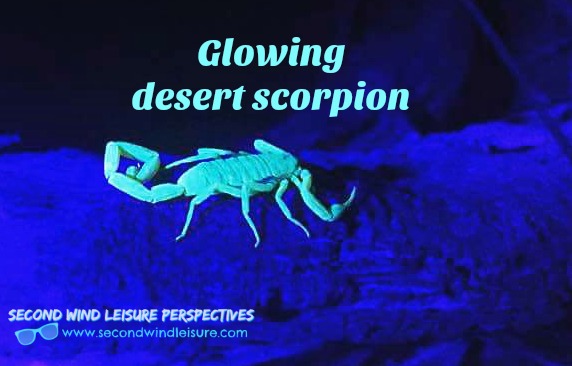 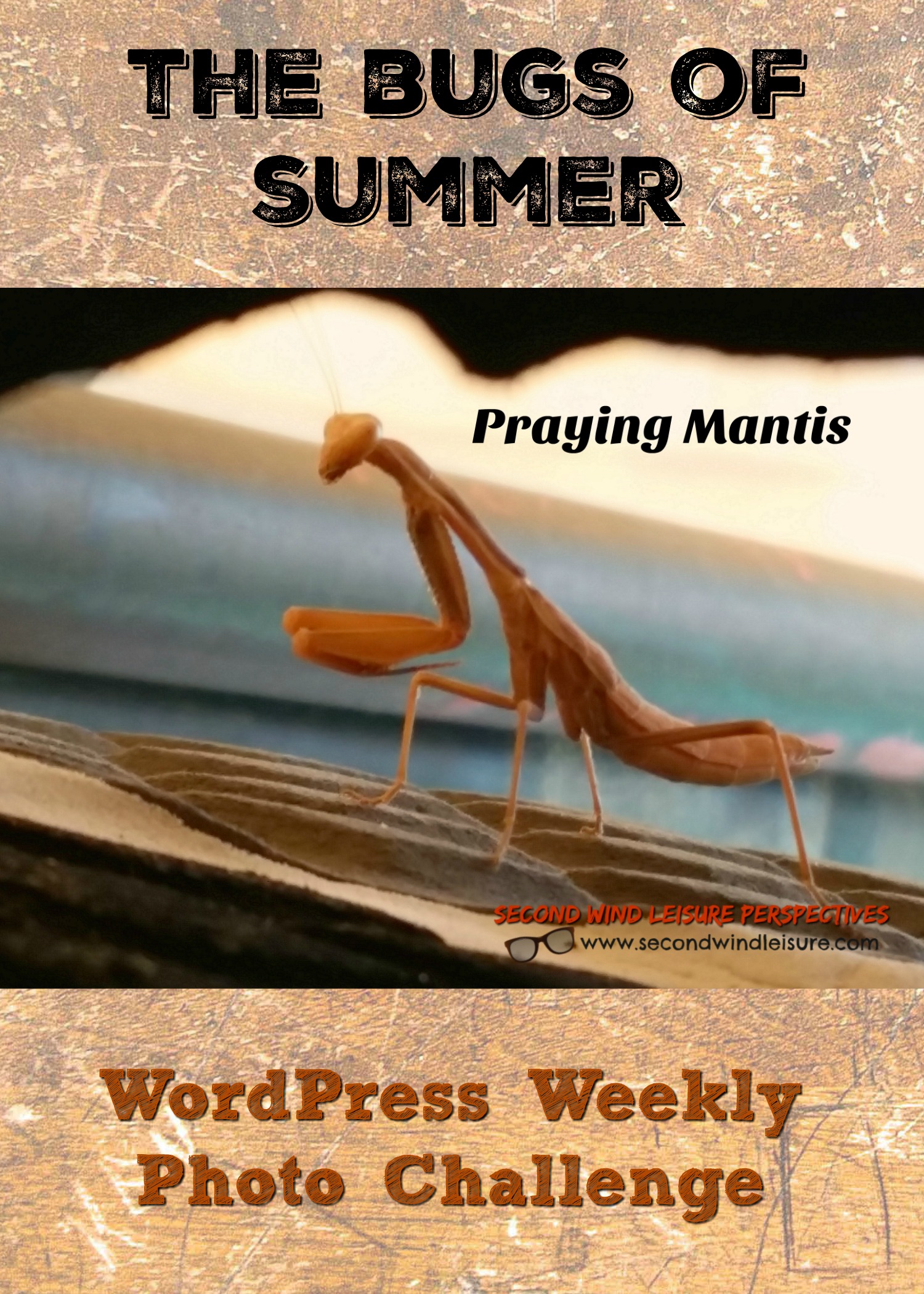 I have this collection of macro photos of insects and spiders (hey, they make great subjects!) This post was “planned” (lurking on my editorial calendar), waiting for the right moment in which to create the post.

The WordPress weekly photo challenge theme was Details, highlighting the fun of macro photography, and lo and behold, my collection of bugs now sees the light of day!

Scared of bugs, you say? Naaah, not of these guys! While not cute or cuddly, they each have a certain character.

Please let me introduce each of them to you.

The first image is of the praying mantis I discovered languishing on my windsurf board. He was very patient while I photographed him. 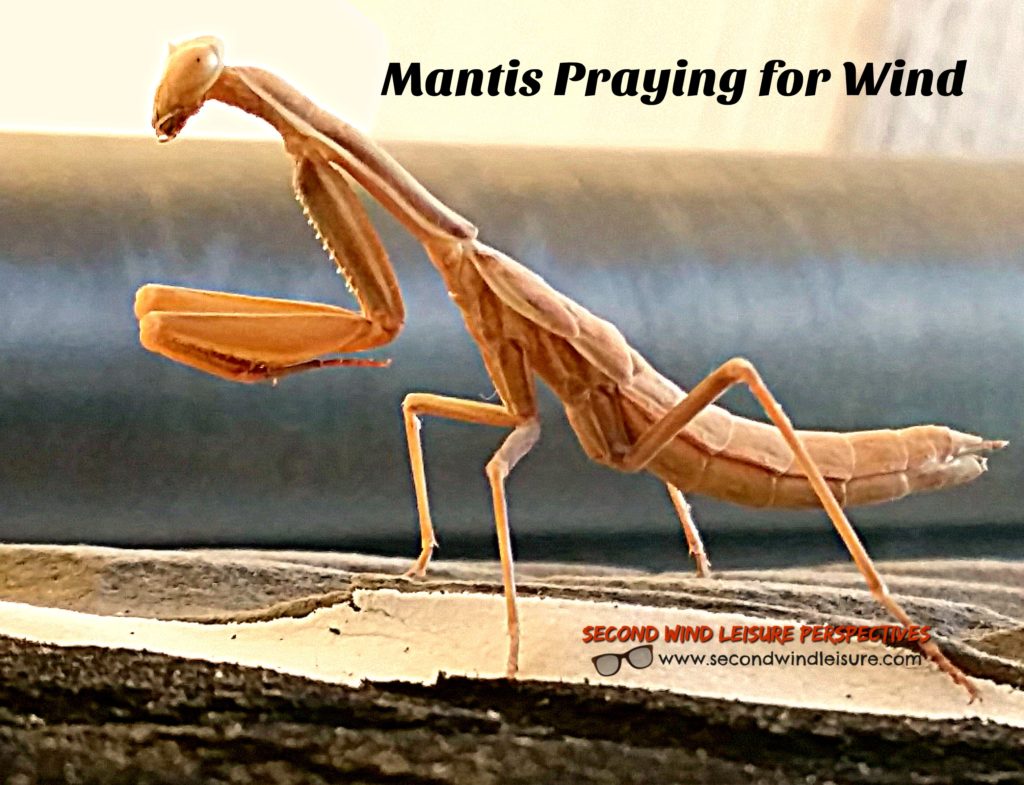 Mantises are distributed worldwide in temperate and tropical habitats. They have triangular heads with bulging eyes supported on flexible necks. All mantis’ have forelegs that are greatly enlarged and adapted for catching and gripping prey.

Crazy fact: sometimes the females decapitate the males just before or during mating.

Here is a large, (at least ½ inch long) Sierra Nevada Carpenter ant. He kept trying to crawl onto my shoe, and while shooting him, I nearly stepped on him! 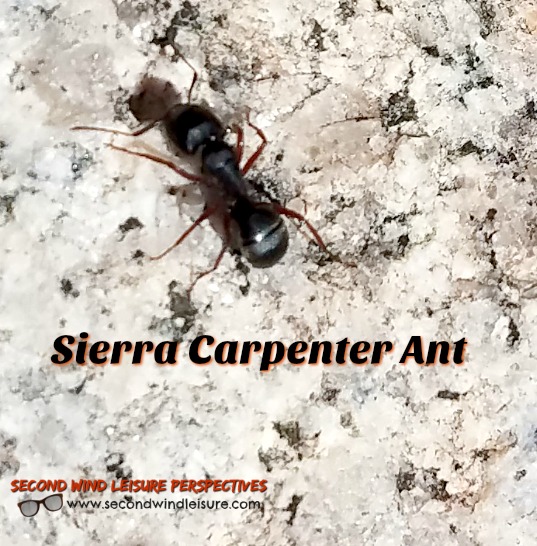 They scuttle over the granite rocks and live in nests made in old logs and stumps. Ants are beneficial and eat destructive forest beetles.

Crazy fact: The queens have been known to have lived as many as 27 years. Simple worker ants can live for several years. 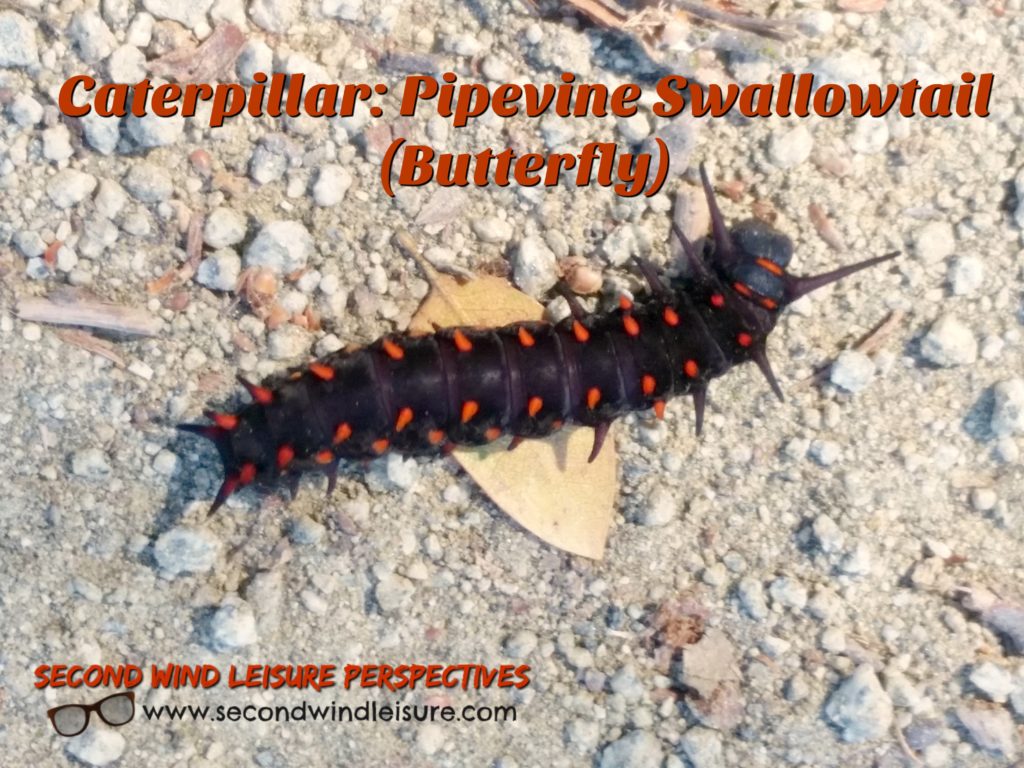 We all know why caterpillars cross the road like this one in the photo…to go become a Pipevine Swallowtail butterfly! The dark, blue-black butterflies can be seen along the American River Bike Trail, IF their caterpillar selves were lucky enough to cross without being squished by cyclists’ tires.

Crazy fact: Pipevine Swallowtails can have a wingspan to up to three and a half inches.

Summer is just not the same without a friendly spider or two.

This 2-inch, cross orb-weaver spider’s legs are specialized for spinning orb webs. The webs are built by the larger females who hang head down in the center of the web or remain hidden in nearby foliage, with one claw hooked to a signal line connected to the main orb waiting for a disturbance to signal the arrival of prey. (Wikipedia)

This little gem was found hanging right outside our trailer front window. Doesn’t she look irritated? (Tell me if you see a face here).

Crazy fact: They are known to recycle their webs by disassembling and eating them.

Unless you live in the sub-tropics, you may not have seen this exciting specimen. He was found hiding in my husband’s rolled up sail last winter in Baja, Mexico

Whip spiders are quite unusual looking arachnids, with their first pair of legs very thin and elongated to several times the length of their body, resembling whips. These long appendages are used like feelers and resemble antennae. They are nocturnal and fairly large; this guy was about 4 inches wide and scuttled sideways, making both my hubby and I jump!

Crazy fact(s): whip spiders do not possess silk glands or venom glands. They subdue their prey by means of raptorial pincers. Eeek!

For more information on unusual spiders, check out this website.

Since we are still in Baja, Mexico, where winter has summer-like temperatures, I would like to introduce you to this feller, a desert scorpion. (See at end of post). They like to hide in woodpiles, so be careful if you are preparing to build a fire.

Most scorpions’ venom is NOT lethal to humans. Its function is primarily to subdue prey.

Crazy fact: Scorpions glow a vibrant blue-green, lighting up like beacons against the darkness under ultraviolet (UV) light. No one knows why scorpions glow. Some have suggested that it’s accidental – the two chemicals responsible for the glow could be by-products of normal chemical reactions.

The Green Shield Bug is a cute little critter that also was very patient as I took his picture.

Beetles are among largest family of the insect kingdom. These beetles have a hard shell that, in this case, looks like a bright green leaf. He was right at home on the white rug of our friend’s Baja home.

Crazy fact: This beetle is close cousin to the stink bug, so be careful how you handle it!

If you haven’t had enough of bug close-ups yet, please check out a fellow blogger at ChosenPerspectives!

I took these photos with my Samsung Galaxy phone and edited them with PicMonkey. If you are interested in more photo tips for blogging, please check out my affordable e-book, Better Blogging with Photography.

I hope you enjoyed meeting the bugs of summer. What are your favorite bugs? Thanks for reading!

A little interior decorating, 🪴 inspired by my niece @gelgygirl Larger plant a mom's day gift from @lauben_mafal and Megan. Small plants 🌿were part of a celebration of life gift basket last March. Thank you @pennypattie and cousin Mark for thinking of us!
And Electrical Contractor said "let there be light!" 💡💛
The shop is complete! 🥂 Doors installed last weekend. This closes our construction loan out at an excellent rate. 🏠 It "only" took 18 months from start to finish and all done during a pandemic. 😷
What you've been waiting for, as @vanessafitnessa already posted...drumroll please...

Strolling around SE Michigan & sending joy in the journey.

This is Another Story

About life, fantasy, and everything in between