This post is intended to educate dog owners about the serious and sometimes fatal threat of canine parvo-virus.

Many of you have “met” my pup Brodie, a purebred Boykin Spaniel. If not, feel free to read about it in Me and My Aero: For the love of a Dog

Brodie came into our lives at 7 weeks old full of Boykin (aka “Destroykin”) Spaniel energy and vigor. At this writing, he is almost 8 months old.

Every dog owner agrees that having their pets vaccinated for a variety of canine diseases is critical to their well-being, not to mention their survival. While I won’t go into the pros and cons of vaccinations here, I will say that having owned 5 dogs myself and being raised around my mom’s collies, I feel strongly that vaccines are necessary.

But they are not infallible.

Brodie got his first round of shots at 7 weeks and continued faithfully until just past 4 months old. We followed all the rules and protocols, so no walks in the front yard or street, kept him crated at the vet’s office, and no contact with other dogs.

There is a reason that young puppies should not be exposed to other dogs (except trusted, vaccinated dogs), nor be exposed to indoor and outdoor areas including your own front yard, the street, parks, pet stores, even the veterinarian’s office.

On July 9, Brodie tested positive for parvo by the emergency care vet, one day short of his 7-month birthday.

Let me share the few hours leading up to this diagnosis.That morning after our early morning walk, he did not drink water or eat. At about 10am he vomited typical puppy stuff–bits of food, paper towel, fluff from a toy–the usual. Two hours later he vomited in the house, this time bile tinged with pink. Oh NO!! He must have swallowed something!

I went back to pick through his now-dried vomit and found jagged rubber pieces from the bottom ring of Aero’s food bowl that Brodie had chewed the night before. Figuring he may have scratched his esophagus or stomach lining, I kept an eye on him but wasn’t overly concerned as yet. He continued to not drink or eat, yet still urinated. He had a loose watery stool, which prompted me call my vet, knowing on a Sunday, they were closed. Although I jotted down the ER hospital’s referral phone number, I was still thinking I would take him to our vet first thing Monday morning. Not long after, he had a violent diarrhea (that, I have to say, scared him as it shot straight out his back end). Double Oh NO!!

As I signed papers agreeing to pay for charges, the tech took Brodie’s temperature which was a little elevated, then came back and said she wanted to test for Parvo. I scoffed at this, telling her Brodie had all his vaccinations. She countered, “With his symptoms, we routinely check for parvo to rule it out.” Another $90 fee, but I reluctantly agreed.

When the diagnosis came back positive a few minutes later, my heart dropped into my stomach, fearing the worst. The veterinarian came in with the test strip showing me the results and suggested I take a photo of it with my phone. I had to sign more papers, an estimate of charges for all the care and treatment. Three days of isolation garners a minimum estimate of $3400! He also encouraged me to consult my regular vet and seek compensation from the pharmaceutical company.

I asked him how was this possible that he contracted parvo after having all of the shots. He explained that similar to human influenza, parvo has mutated into more resistant strains for which vaccines haven’t yet been developed.

After hearing more instructions as to what would happen next, I spent a few minutes with 40-pound Brodie sitting in my lap like the “toddler” he is and just rocked him back and forth. The caring techs carried Brodie to the isolation unit, and I had to dip the bottom of my sandals in a bleach solution before walking into the lobby. I paid the deposit, still somewhat numb from the shock. I picked up Aero, and as soon as I got into the car I started sobbing, thinking I might not see my puppy alive again. I called hubby who was still in Spokane and the news ruined his dinner.

Canine parvo-virus can be fatal in young puppies and aging dogs.

I went home, petted and reassured Aero (who by the way is in no threat to parvo since he has had several consistent booster shots in the last seven years), then began the tortuous cleaning and bleaching everything with which poor Brodie came into contact. Most of his fluffy toys had to be tossed in the garbage. I had to spray an outdoor bleach solution on spots in the yard, on his crate, and launder his bedding in a heavy bleach solution. I even bleached his leashes and collars.

I tearfully posted Brodie’s plight on my FaceBook page and on the Boykin Spaniel Lovers page and received wonderful love, support and encouragement. According to several comments, the good news is that puppies Brodie’s age (at 7 months) who have been vaccinated, have a great chance of surviving with proper treatment.

Brodie spent the first of at least three nights in isolation at the animal hospital. Since parvo is so contagious, the medical staff must take extreme precautions. I had been out of sorts about this all day but I talked to the vet who gave me a good prognosis. 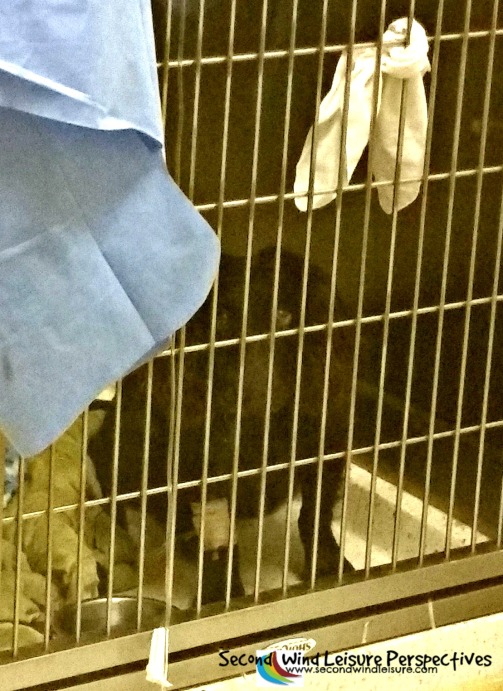 At noon, they let me visit him, but I stayed behind the windows of the partitioned area. He was the only dog in isolation, but tech staff is always there 24/7. He has never been alone before and I feared he thought I had abandoned him. I dropped off a handkerchief with my scent on it asking the tech to put it in Brodie’s kennel. When I saw him, he recognized me,  and visibly brightened!

After visiting Brodie, I went to my vet’s office to tell them what happened. The regional office manager of Sacramento area VCA Animal Hospitals happened to be at the front desk. As I told her about Brodie, she said, “I have worked in this industry for 27 years, and I have heard of these rare cases, but have never seen one.” She proceeded to start a case file and contact the pharmaceutical company.

Tuesday morning, the vet called me with an update. She said, “Brodie is responding well to fluids and medications.” He is feeling so good, that he chewed through his IV tube” (inserted in front leg), prompting them to place the “cone of shame” around his neck. She said he may be released later that evening.

And he was! He ended up spending just two nights there. The vet gave us a list of instructions and several medications to give to Brodie.

The vet told us that vaccinations are shipped nationwide to hospitals, feed stores, vets’ offices, etc. The vaccines are supposed to be shipped in temperature-controlled packaging. She said once, in her experience, a shipment arrived late on a Friday on a hot summer day and wasn’t discovered until two days later. They sent it back unopened. If the vaccine is administered too cold or too warm, it can be rendered ineffective.

As if that is not scary enough!

That evening, he was very happy to be home, but seemed weak. The next day, although he didn’t eat much, and slept on and off most of the day, he looked much better. By the weekend, he seemed back to normal, eating several times a day to make up for those lost meals!

How do you avoid the threat of parvo?

“The virus is everywhere. Even if your puppy or grown dog doesn’t come in contact with a sick animal, they can contract it from the surface of dog bowls, shared water, dog park facilities, and it can be transmitted even long after an infected dog was in the facility or home. The most common mode of transmission is through contact with contaminated feces, or direct, dog-to-dog contact. Since dogs don’t commonly show signs of illness during the initial incubation phase, your dog could be playing with an infected dog and you would not be able to tell.” Janet Garmin, for Countryside Daily

For the full story, read What is Parvo in Dogs? written by fellow Boykin Spaniel owner and freelance writer Janet Garmin.

Signs & Symptoms of Parvo in Dogs

The major symptoms associated with the intestinal form of a canine parvovirus infection include:

The intestinal form of CPV affects the body’s ability to absorb nutrients, and an affected animal will quickly become dehydrated and weak from lack of protein and fluid absorption. Source: PetMD: Canine Parvo-virus

Obviously these are serious symptoms!

Because I did not suspect parvo, I almost did not take Brodie to the ER vet. My instinct and quick action likely saved his life, and definitely reduced his treatment time in the hospital.

Fast forward, two weeks later. The vet’s office called to tell me the pharmaceutical company is completely reimbursing me (over $2300).

Brodie is blessed and so am I! 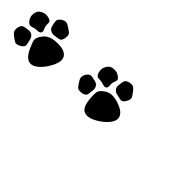 Have you ever had to deal with a beloved pet’s illness? Please share in the comments.

Looking for something? Type and PRESS ENTER.

Exploring my world with pictures and words.

The Showers of Blessings

"It's Never Too Late to Look Great"

All those moments will be lost in time, like tears in rain!

A Galaxy of Thoughts and Creativity

This blog is my creative outlet where I can share my photos, my travels, my random thoughts and a bit of myself.

life through my lens

Roaming, at home and abroad

Exploring my world with pictures and words.

The Showers of Blessings

"It's Never Too Late to Look Great"

All those moments will be lost in time, like tears in rain!

A Galaxy of Thoughts and Creativity

This blog is my creative outlet where I can share my photos, my travels, my random thoughts and a bit of myself.

life through my lens

Roaming, at home and abroad