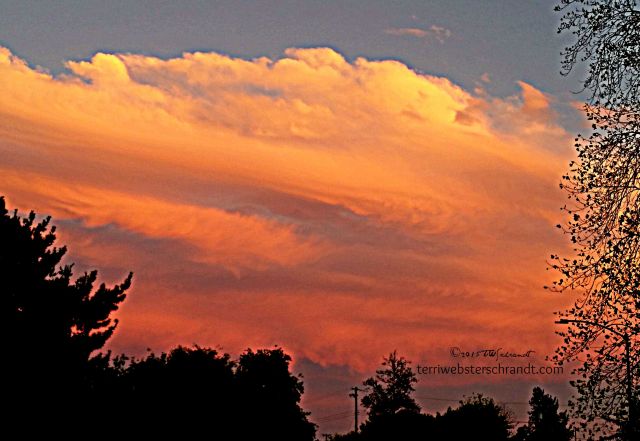 Will bloody clouds yield a Super Blood Moon and view of the Lunar Eclipse?

According to CNN — Stargazers, night owls and space observers, be prepared, the eclipse of the supermoon is coming.

The United States and much of the world will see skies graced by a bright, big moon that will be encapsulated in a total lunar eclipse late Sunday evening into early Monday, according to NASA.

The lunar combination is happening for the first time in 30 years.

The supermoon, which comes around once every year, will appear 14% larger and 30% brighter in the sky that evening before it is engulfed by an eclipse for more than an hour.

As if that wasn’t already a spectacular sight, this eclipse is the fourth and final in the so called “blood moons,” a phrase that has become popular to describe the four lunar eclipses we have seen in 2014 and 2015. Scientifically this is known as a “lunar tetrad.”

Another supermoon eclipse will not occur again until 2033.

The clouds blew away. My smart phone barely captured the lunar eclipse. I prettied it up with a quote from the song “Eclipse” from Pink Floyd’s Dark Side of the Moon © 1995-2014 Pink-Floyd-Lyrics.com

“…and everything under the sun is in tune
but the sun is eclipsed by the moon.” Pink Floyd

These pics will go into Lucile De Godoy’s “The clinic, Photo101 Rehab

I am a leisure educator (university adjunct faculty), self-published author, and retired recreation and parks practitioner living in Northern California. Second Wind Leisure Perspectives is my blog about living a leisure lifestyle.

Chambers on the Road

RV, other Travels and Home Life in Retirement

Step into your potential.

Come along on an adventure with us!

Stories about the challenges and adventures of a traveling, mid-life, unexpected widow

Remembering past journeys, recording current trips and planning for the next one!